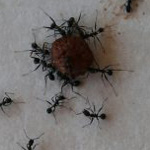 Pavement ants can be a nuisance in virtually every state when they emerge from their ground nests and enter homes in search of food. They’re called “pavement ants” because they tend to live beneath areas such as cellar slabs, driveways, brick or stone patios, sidewalks, as well as in and under organic hiding places, such as logs and in mulch.

In addition to identifying pavement ants by their distinctive mounds of sand and soil, you can differentiate them from other common ants such as carpenter ants by their brownish-black color and tiny size – often no more than 1/10 to 1/16 of an inch in length. Pavement ant legs and antennae tend to be pale-colored and if you look at them under a magnifying glass, you’ll notice their antennae have twelve segments and there are parallel lines on the head and body, or thorax.

If you suspect you have pavement ants, keep in mind that these colonies can be very difficult to locate and often times even harder to eliminate. You may want to consider contacting Ford’s Hometown Services who have licensed technicians and many years of hands on experience. Ford’s Hometown Services experts can quickly determine if pavement ant colonies are present and can eliminate your pavement ant problem quickly and efficiently.

Six Tips to Protect Yourself During the 2021 Mosquito SeasonMosquito season is upon us here in Massachusetts, with mosquitoes being most active in Massachusetts from June through August.This year is forecasted to be worse than normal, with a mild winter allowing more...

END_OF_DOCUMENT_TOKEN_TO_BE_REPLACED

Carpenter Ant Season is HereWhile most of us celebrate winter turning to spring, it’s also the time of year that many pests become active. That’s certainly true for carpenter ants. They become active in the spring and remain active till fall. In more established...

END_OF_DOCUMENT_TOKEN_TO_BE_REPLACED

2021 Tick Forecast Cause for ConcernTicks are a nuisance every year, but 2021 could be one for the record books. Forecasters are predicting this year, with warm and wet weather, will drive tick populations higher than normal.According to pests.org, the Northeast is...

END_OF_DOCUMENT_TOKEN_TO_BE_REPLACED

Six Tips to Protect Yourself During the 2021 Mosquito SeasonMosquito season is upon us here in...

Carpenter Ant Season is HereWhile most of us celebrate winter turning to spring, it’s also the...

2021 Tick Forecast Cause for ConcernTicks are a nuisance every year, but 2021 could be one for the...

3 Signs of a Termite Infestation

3 Signs of a Termite Infestation It’s not always easy to know if you have termites. They are...

Three Steps to Getting Rid of Bats in Your Attic For GoodBats are a vital part of our ecosystem —...

Ford’s Hometown Services…The Best in Pest Control and Lawn Care for Over 79 Years.